November 3, 2006
I don’t want to brag or anything, but I’m getting smarter and smarter about these updates…this one includes a few photos! I have also been putting photos on Facebook, but it takes forever to upload them so it’s a slow process. I only have a few things to update y’all on:

Halloween was pretty fun. A bunch of us from school went to a club on Calle Betis called Boss. It was my first time having been there and even though it’s bigger and fancier than Doblon I think I prefer Doblon. First of all, Boss charged us 10€ and they would only let a few of us in at a time. I think they just keep people waiting outside at all times so it appears to be a super popular place. Halloween has just started to become somewhat popular in Spain; I think most of the clubs have parties because they know the Americans will come with their money. Most of us still dressed up and everything. As you can see from the photo, I was a pirate a la Johnny Depp (I even put my hair in fake dreads) and I had a cheap toe ring which I wore in my nose. And before my family freaks out at my skirt, I was wearing shorts underneath! I didn’t stay out too awful late; I was back at the house by 4 am, because I had to get up to go to Gibraltar the next day.

November 1 is All Saints’ Day and everything is closed. There’s no school or work or anything. It actually surprises me that they don’t celebrate Halloween more simply for the fact that they are guaranteed the next day off to recuperate—Spaniards look for any possible reason to party, so why not this one? It just seems so obvious to me… 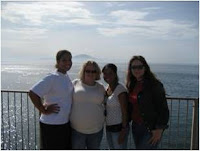 Anyway, I signed up to go to Gibraltar for the day with DiscoverSevilla, the same student travel agency I went to Lagos with and will be going to Morocco with in December. 3 other friends from the program went with me and we had a whole lot of fun! Gibraltar is a small place but it’s cool because it’s the southernmost point in Europe. Although it’s in Spain it is a British territory so everyone spoke English and prices were always listed in pounds, although the Euro was accepted. At Europa Point (the southernmost tip) you can see Africa, which is only 13 miles away) and where the Mediterranean Sea and Atlantic Ocean meet. Here is a picture of my friends and me with [Motherland] Africa in the background. I say Motherland because I am the minority in the group of friends I have here at the program—it’s me and all the African-American students. And they all know that I’m really black deep down, it’s like a joke we have…My roommate and I plan on kissing the ground when we do go to Africa.

One interesting thing I didn’t know about Gibraltar is that the rock itself is full of over 140 caves! It’s made of limestone (just like the KY) so caves form easily. It reminded me of the caves at Nerja because they’ve converted one of the caves to include a theatre. The caves are cool enough, but I guess because I can go to Mammoth Cave or Natural Bridge whenever I want, I’m not as impressed as some of my other friends. I didn’t realize that not everyone had gone on field trips to caves as a child.

I took one cute picture in this little spot, but then I felt the need to do my Golem impression from Lord of the Rings. So here I am, coveting the precious.

I guess the most famous aspect of Gibraltar would have to be the monkeys. Gibraltar is home to the only monkeys in Europe which roam free in a semi-wild state. Those monkeys are a trip! They have no problem interacting with the tourists (or trying to steal their food, cameras, etc.). Of course, I had a monkey sit on my head. My friend has the pictures of that so y’all can’t see them yet. As we drove up the rock one monkey jumped in the window of the van and started honking the horn! It was so hilarious. And the baby monkeys are currently ranked as #1 under cutest things I have ever seen! You can’t touch the baby monkeys, unless you want to be attacked by the mama…and I didn’t really feel like fighting a monkey so I steered clear. If you don’t think this monkey is the cutest thing on the face of the planet, well you are a LIAR! 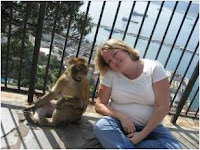 Here’s a funny monkey story: So I went and sat down next to this monkey because he was just chillin’ there so I figured I’d go and chat it up. So there we were, hanging out with my friend Alicia taking pictures when my other friend Esmelda wanted to come and sit on the other side. She set her purse down next to Alicia and came to sit with me and my new friend. However, Esmelda had left her purse open and this other monkey came out of nowhere and got inside her purse and grabbed the plastic bag containing the rest of her lunch (a plum and a banana). That monkey was the fastest thing I’d ever seen! Alicia and Esmelda let out these little shrieks, but I didn’t. You’d think that would’ve startled my monkey friend and he would’ve run away. Nope. All he did was reach over and put his hand on my leg, just like a human might do in a startling situation. So all I said was, “Calm down, monkey. It’s OK.” So me and my monkey pal just hung out while Esmelda watched the other monkey eat her lunch. She was lucky though, one girl got peed on by a monkey. I think that’s moderately hilarious, mainly because I wasn’t the one covered in monkey urine. Had it been me, it would be slightly less comical. Our tour guide told us that the monkeys think that any and all plastic bags contain food so they snatch them right up. This one monkey tried to take my camera, but I said, “Hey monkey, that’s not funny.” And as you can see from this picture, monkeys do not understand the command, “Hey monkey, make a sexy face for this picture.” But apparently neither do I because that face isn’t very sexy. It looks like one of Ben Stiller’s “looks” from Zoolander. So clearly, Gibraltar was cool. 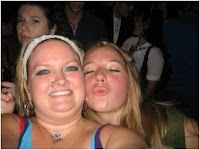 In other news, as many of you know I have been trying to lose weight and I must admit I am having some success. I knew that I had lost some weight, but I didn’t realize just how much until yesterday. I was standing in the lobby of my school, chatting with a few friends in between classes when my skirt just fell off! Luckily, I was wearing leggings and they were all girlfriends. But it was hilarious! For the rest of the day, whenever there was a silence, my friend Carly would look at me and say, “Hey, remember when your skirt fell off?” I guess I would’ve preferred to notice my weight loss in a different manner, but I’ll take what I can get. I don’t have a picture of weight loss, so here’s a picture of Carly and me on Halloween. She went as a tree…and her eyes are closed.

This weekend there is absolutely nothing going on—it feels weird that we don’t have a school trip or something we’ve planned on our own. It’s kind of nice; we can just do whatever we want. Thus why I am making this kick ass update…and now I’m so proud of my addition of pictures I think I will make a separate update email with some various pictures.