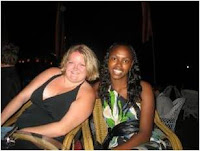 September 19, 2006
I've finally figured out how to get my wireless connection working so that I can update you on my time in Sevilla.

Things are going a lot better than when I sent my first update. That week was really sub-par as far as the conditions at my house and I was getting really irritated because nothing was going right. I think that the Housing Director hinted around to my housemother that it was not what my roommate and I had expected and things have been getting better since then.

Sevilla is a very interesting place--it's not like any other part of Spain (or Europe for that matter). Several of my teachers have described the defiant Spanish attitude as the result of living 4 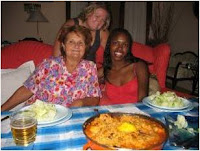 0 years under the harsh Franco regime (in which it was illegal to hold hands on the street). It makes sense that these people are going a little crazy expressing themselves, but it can still be frustrating at times. It's the little things that have a tendency to irritate you sometimes. For example, businesses don't seem too concerned with customer service or even turning a profit. In the rare occassion that a business has hours posted on the door or window, it does not mean that anyone will be there during those hours. I don't think there is a word for customer service in Spain, the people are generally concerned with #1 and no one else. I can't help but laugh sometimes. Another crazy thing is the driving/parking. Remember in Pirates of the Caribbean when Capt. Jack describes the code as guidelines rather than laws? That, in a nutshell, is Spain. They drive very erratically--although, my housemother tried to tell me that Sevil 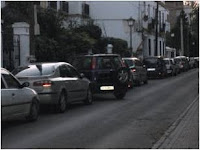 la drivers are very good and American drivers are very bad, not letting the fact that she's never been to America get in her way. They often double park, blocking in other cars simply because it's the closest spot to the store they want to go to. They put their flashers on as if to say, "I'm not here, but I'll be back soon enough." When other drivers want to leave they either push the double parked car out of the way (the "kind" driver leaves the emergency break off so that this is possible) or blares on the horn until the other driver emerges from the store or restaurant. They also have no problem talking your ear off about something they know nothing about, like my housemother telling me all about American driving. 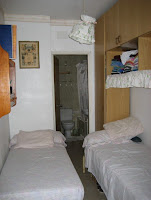 Each day is full of new adventures. Even if I don't leave the house I have some sort of crazy experience--such as breaking the key off in the door, all the lights going out while I'm taking a shower...

We had a field trip to Jerez last Friday and it was very interesting. Jerez is a town where they make sherry, we visited the bodega and sampled the sherry before going to the beach. Some friends and I also plan on taking a few trips to Lagos (Portugal), Morocco, Gibraltar and who knows where else!
Posted by Back in Black at 7:02 PM