October 9, 2006
I have discovered that the point at which you miss America the most is when you are sick. Actually, it's the point at which you know you are sick and the doctor disagrees with you and you know that you're doctor back home (or even the people at the GC infirmary, for that matter) would give you an antibiotic even if it was just to shut you up. I have, as my new group of Boston friends would say, a 'wicked bad cough.' Loss of at least one lung is unavoidable, but I've made my peace with it. After all, the doctor said it was nothing, so why worry? 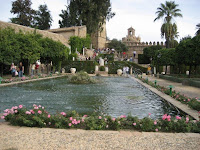 In other news, I am thoroughly enjoying my flamenco class--and I'm pretty good at it. And no, I am not being sarcastic, I rock that stomp-dance. It is a lot of hard work though.
This past weekend I went to Italica on Friday which is right outside Sevilla and has a lot of Roman ruins (much like the rest of Sevilla) and that was interesting. I think that Sevilla has the most Roman ruins outside of Italy. On Saturday we went to Cordoba and saw the mezquita or mosque--it was really amazing! I took a lot of pictures, I had never seen anything like it. Cordoba was less exciting than I thought it would be, but it was fun nonetheless.

The real excitement starts this Thursday--It's an extra long weekend, we have Thursday off (in addition to Friday, which we always have off) and a bunch of us are going to Lagos in Portugal with a travel agency called Discover Sevilla. It is going to be one big crazy party, and I am excited! Then next weekend I am going to Barcelona with a few friends. I have all sorts of trips from here on out and I know the time is just going to fly by! 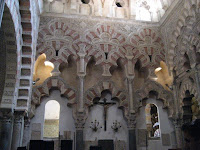 I don't feel as though my Spanish is improving--although I'm sure it is, it has to be. It just seems like I'm the same, maybe it's one of those things that I won't really notice until I get home and see how much better than the rest of you I am (HAHAHA!!!). 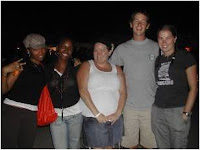 What else? I don't know if it's just Sevilla or all of Spain, but they sure do love festivals. It seems like everywhere you look there's a celebration of something or other going on at all times. There is a fair going on in the park right now, called the Fair of Nations. It's going on all month long and there are all these little booths of different countries where you can either try food or buy stuff from their countries. There is a USA booth, but it sucks. Come on, USA! Get with the program already. They sell fancy clocks and pens and some other stupid stuff. I guess I don't know what I would put in a USA booth either, most everything we have that's any good is available to the rest of the world. Not to mention the craftsmanship of a USA-made item has never been anything to brag about.
Anything interesting going on back home? I'm sure Georgetown folks are in full swing of Songfestivusness, which sucks. Any good school gossip to report on? Who wore what to the Caf, things of that nature. I hear someone is writing a relationship column for The Georgetonian, that has to be worth a laugh or seven.
And what of pop culture? Has anything intensely scandalous happened on any of my programs (CSI, Law & Order: SVU, Desperate Housewives, Grey's Anatomy)? Have they named a winner in Project Runway yet? Is Jon Stewart still well? Did they ever name that bridge after Steven Colbert? Is Jessica Simpson still receiving more attention than she deserves (which is none)? What of Jennifer Aniston and Vince Vaughn? I MUST KNOW!! They have my trashy magazines (such as InTouch) here, but they're all about Spanish people who I don't give a crap about!
I'll tell you what's weird, watching The Simpsons in Spanish. It's just not right. The Simpsons should only be broadcast in English. It is the main reason people should learn English. What is odd is that whenever the characters sing a song, it's in English with Spanish subtitles. I'd really luck out if one of the musical episodes came on. 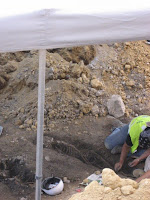 Oh yeah, I wanted to tell everyone about the skeleton. Yes, I said skeleton. As previously mentioned, Sevilla has ruins of every possible civilization coming out of their ears. They are also in the process of building a Metro [I am quite certain I have mentioned both these things before] but they can't dig more than 3 feet under the surface without finding more ruins. You may recall my professor's impression of their reaction, "Oh shit--Roman ruins! Cover 'em up, don't tell anyone." Well, I was walking in the Centro in order to purchase some flamenco shoes (there's a sentence you don't hear every day) when I looked at the construction and saw a human skeleton!! They had found it a day or 2 before and were 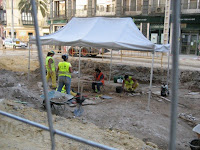 in the process of excavating it in the little amount of time allotted to them (mustn't slow down the Metro construction, even if it is for the missing link). I took a few photos, which is good because when I was down there again a few days later it was all gone. I always look at the construction (as do a great deal of people) because you never know what the next shovel-full of dirt might contain; the Holy Grail, Jesus, Atlantis. Just the other day I saw them dusting off more stuff. It's so weird how they're so cavalier about it--it's a freakin' human skeleton right next to the Starbucks! How is that not CRAZY?

I have booked one more trip for this semester, November 9-12 I'm going to Paris with a friend. I hate the French, but dammit do I want to see that stupid tower. I guess I can tolerate the stupid French if it means I get to see such an architectural wonder. And don't think my feelings towards the French are unfounded, I have been to France, they are not nice. If you disagree, well you're wrong. And if you are French, why are you so mean? 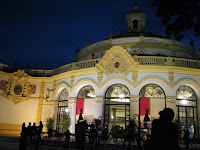 I have also learned some useful phrases from one of my teachers. I guess we would call them curse words but it's different here. Not only do people curse more freely but their expressions, when literally translated, are so obscene I won't type them in emails that are going to my gramma, but to the Spaniards they are just expressions. I'll explain them in more detail to anyone who wishes to know.

Well, I have more to do before flamenco class starts so that's all for now.
Posted by Back in Black at 7:11 PM