A Long Weekend in Lagos

October 17, 2006
I was unsure about updating everyone on this as it is sensitive but I think that it's important for everyone to see, especially the girls because it is a very serious situation. I went to Lagos (Portugal) over the long weekend and had an amazing time, despite the fact that I was attacked in a club on Saturday night. I'm including the details of the attack because I like to think of myself as a cautious person (as are many of you all) and I wanted you to see how easy it is for even a cautious person to be caught off-guard and have a close call. You don't have to read the following paragraph if you don't want to, simply know that I am lucky enough to have escaped and very little happened.

My friends and I were at a club and people started leaving in small groups which led to mis-communication as to who was still there and who had gone back to the hotel. Like most people, I dance with everybody because I'm just there to have fun. So, this guy started dancing with me (no problem) and then he started trying to kiss me. He had managed to lead me into a corner of the club so that I was trapped with my back against a wall and nothing but him in front of me. We were still in front of everyone, but due to my height nobody could really see me. I wasn't even aware that we had migrated that far from the dance floor. He started biting me, poured beer on me and had his hands all over me. He kept putting his hands up my skirt and beyond. I was shoving his hands away, saying no and standing with my legs tightly crossed thinking that maybe that would keep his fingers from getting up there. He eventually grabbed one of my legs and hoisted it in the air so that I lost my balance. I fell onto my knees and was practically under the bar. The next thing I knew, he was attempting to force his penis into my mouth--I kept turning my head either way, but I couldn't get away. He was holding my head down. Soon, a man at the bar realized what was going on and must have said something to this man or pushed him--all I know is it looked like they were about to get into a fight. This enabled me to get up off the floor and my friend saw me and pulled me away. As the guy tried to follow me and grab at me, she and one of her guy friends blocked his way telling him that I didn't want to be near him and that I was going home. I got a taxi and went back to the hotel and just sat outside crying. 2 girls that I met on the trip arrived and talked with me and helped me to my room. Right now I'm trying to reach a point at which I can close my eyes without reliving this experience. While I know it's not my fault, I can't help but feel a little guilty/dirty.

This story goes to show you that even the most "in control" person can be caught off guard and that you can never be too careful. While men in Europe do seem to be a lot more aggressive than American men, it doesn't mean it won't happen in the States either. Always remember to be careful and keep an eye on your friends! When leaving the club, double and triple check if necessary to see if everyone is leaving so that no one winds up alone. I'm lucky that nothing serious happened, but I very easily could have been raped that night. I know that from now on I will always be more careful and hope you will do the same. And please let your loved ones know about this, so they can be careful, too! 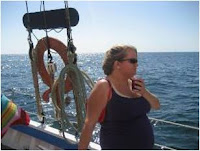 Seriously though, Portugal was awesome otherwise!

I am still sick, but I went to the doctor yesterday and refused to leave until they gave me anti-biotics, so hopefully I am on the road to recovery! I will be spending this weekend in Barcelona (a city I love) and could not be more excited!! I also promise that I will have some pictures up soon, I really am trying. I want all of you to see the things I am seeing while I'm here.
Next time my update will be the usual witty banter, etc.
Posted by Back in Black at 7:12 PM