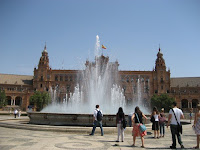 I hope everyone is doing quite well, and I hope that many of you have received your postcards! If you haven't, you most likely didn't request one or give me your address...so get on that. Here's what's new with me:

A few of my friends and I are planning on taking several trips in and around Spain in addition to the ones sponsored by the school. I just got back from a weekend in Nerja, a small beach on the Mediterranean (in other news, I have learned how to spell Mediterranean) 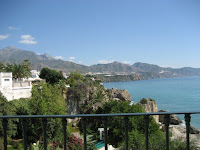 which was quite nice. I debated on messaging/calling a few of you since I was on a beach and I knew it was chilly in KY but it turns out I'm a nicer person than that. I will be going to Lagos (Portugal) next weekend (Oct.12-15) to do some major partying with friends. The following weekend I am going to Barcelona, I've been before but I really love it. On November 1 I am going to Gibraltar for a little day trip--I want to see the monkeys. My final trip is December 6-10 and I am going to Morocco and the Sahara Desert.

Here's an observation I have made about Spain...it might get a tad bit gross, but deal with it. I see a lot of commercials (or annuncios) for fiber supplements and various other methods of "staying regular" which leads me to consider the state in which my roommate and I (along with most of the other students) find ourselves. We have no problem maintaining said regularity on this Mediterranean diet. I don't know if the Spaniards are just extra backed up or if they believe in preventative medicine... 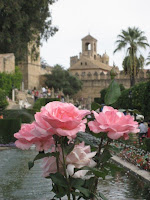 Speaking of medicine, you can get virtually anything here without a prescription. My roommate had to go to the doctor so I went with her to translate and then we went to the pharmacy. While we were there we got some drugs for the aforementioned problem and I realized we could've asked for just about anything and gotten it. Valium, Oxycontin...who knows!

I would like to give a little shout out to my little brother and his girlfriend--Will just turned 17 and MiSun was crowned Homecoming Queen of Lafayette. Way to go, kids.

Well, I'm sure I have more to say...but I have a lot to do on the internet before my first sevillanas (a Sevilla flamenco dance) class starts!! What do you people think I do, sit around and write emails all day?!
Posted by Back in Black at 7:08 PM