November 30, 2006
Cheerio chaps and some English word for girls!
Sorry it’s taken so long for me to write this update on London, but I had a history paper to type…and some siestas to take. Actually I am trying to wrap everything up since I’m almost done here in Sevilla. I want to finish all my papers/projects since I’m going to Morocco next week and finals start as soon as I get back! It’s pretty hectic. I guess that’s why they give you the assignments way in advance, so you can do a little time management. Well, live and learn I guess. I don’t really subscribe to the whole “thinking ahead” concept when it comes to school work. I feel that leaving things until the last minute adds character. But, seriously: London.
I absolutely ♥love♥ London! I would go back in a heartbeat…especially if someone else was paying, so if you’re feeling generous…I took a whole lot of pictures and I will be including the link to the album(s) in this email. 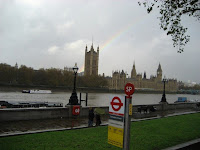 While you were all enjoying Thanksgiving dinner, I was on a plane to Stansted. Here’s an interesting fact, Stansted is about 2 hours outside of London. You might want to remember that. While there is an express train that takes 47 minutes, it does not run all the time. For example, if you arrive around midnight, no train for you. You get to take the bus! After the bus, I took a taxi to my hostel.

England taxis are the coolest. They’re called Black Cabs (I like them already) and they look similar to PT Cruisers, but more old school. And they’re HUGE inside! I felt like I was in the old days or something. By about 3:30 or 4 a.m. I arrived at Astor’s Quest Hostel which was very nice. It was on the same street as a bunch of nice hotels and stuff.

Here is my first observation of London: COLD Mind-numbing, never-ending, hardly bearable cold. It is also cloudy, which I don’t mind as many of you know my feelings towards the sun (public enemy #1…after Dubya).

I didn’t sleep too long because I wanted to get up and see stuff! Here’s another fun fact: England does not use the same outlets as the rest of Europe. They have to be different (England and America really aren’t all that different; we’re both stubborn as hell). I wish someone had told me this before I came. After coffee, a muffin and a bus ticket, my next purchase was outlet adapter (and some toothpaste, but that’s not important--unless you’re a dentist). 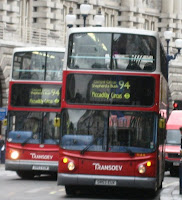 I hopped on a bus (and you bet I sat on the top!) and rode down towards Piccadilly Circus. As best as I can figure out, when English people say circus they mean intersection or plaza. It was not a real circus, which is good because I’m not fond of clowns. They say that you cannot stand in Piccadilly Circus for more than 37 minutes without running into someone you know or recognize unless you are from the Galapagos Islands (I’m not kidding). Apparently it’s one of the most visited places on earth. I test the theory, because it was so cold, but I believe them. And later I met some people from Ohio on a bus, and they both knew about Georgetown College so I counted that.

I bought a pass for one of those hop-on, hop-off tour buses and it was good for 24 hours (it was also good for a river cruise on the Thames, but I sure as hell wasn’t doing that). The company had 3 or 4 different tours and I did 2 of them. I got my money’s worth! 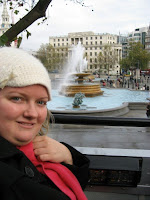 Now, this is why I told you about the outlet situation. After I took my shower that morning, I was pretty shit-outta-luck when it came to drying my hair. I towel-dried it as best as I could and put a hat on, I figured since I already have the Plague I can’t get much worse. The aforementioned tour buses are also of the double decker persuasion, except the top floor is uncovered. Naturally, the best seats (and the best photo opts) are from the tops of the buses. So there I was in freezing England, with wet hair, on top of a bus in the wind. It was a good combination. I do think the wind helped dry my hair faster, though. I rode around like this for a good 90 minutes. I will say that once I got off the bus, I wasn’t cold walking along the streets!

What else did I do on Friday? Rode around on the bus, ate some McNuggets at the Embassy, and checked stuff out before heading back to the hostel to get ready for Wicked! 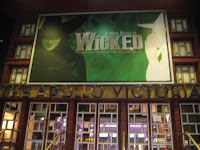 OH MY GOD. Wicked was amazing! I cannot even put it into words for you…but I’ll try. I was so excited before the show started I could hardly contain myself. I didn’t even care that a woman about 4 seats away from me had on the exact same dress I did (I noticed, but I didn’t care). I also took some illegal photos of the stage before the show started. So the show starts and I am ready to pee my pants, and then she comes out. Now I don’t mean this in a blasphemous way, but I think that listening to Idina Menzel sing live is right up there with accepting Jesus into your heart on the scale of most important things one can do in life. I literally got chills as soon as she started singing—she’s just that good. I was in a trance for the entire show. It was so much better than I even thought it would be; and I didn’t know that it ended the way it does. When it was over, I couldn’t speak. I just walked around for awhile. I wanted someone to take my picture in front of the theatre, but I couldn’t speak to ask them so I had to take one myself. I also took a picture of the curtain call, it’s really horrible but I don’t care. I was so happy that night!

On Saturday I decided to do another bus tour. It wasn’t as cold as it had been on Friday, but it started raining. Like a trooper, I stayed up top! The tour company provided some lovely white garbage-bag-esque ponchos for us to wear, so I was good to go. I took a hiatus from my bus to visit the London Dungeon which is a museum devoted to London’s bloody, gruesome history. It had everything from medieval torture, the plague and the great fire to Jack the Ripper. It was fine, family fun. Actually it was very creepy and interesting. After the Dungeon, I hopped back on the bus to finish out the tour and then decided that I would try to see another show that night. 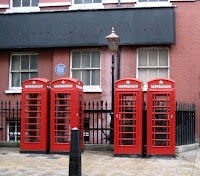 I’d been hearing a lot about Avenue Q and thought that might be fun. All I really knew was that it had won a Tony, was fairly new and there were puppets (of the muppet persuasion). Think of it as a Sesame Street for adults—dealing with all the problems of the real world (homelessness, racism, drunken sex, one night stands, homosexuality, etc.). It was HILARIOUS! I laughed so hard I thought I’d die (luckily, I didn’t). I definitely recommend it for all those who are not easily offended prudes, hard-core Republicans might not like it either (but what do they like?).

England is so flippin’ expensive it’s unreal. The pound sterling is roughly double the value of the dollar, which is cool. But London is officially the most expensive city in all of Europe. After the show I decided it would be best for my bank account if I just went back to the hostel. I was tired anyway. I did stop at a gas station and buy a few of the comforts of home I’ve been missing in Spain. Since no one was in the room when I got back, I made a little altar to them…

I guess that’s all I’m going to say about London (except that I can’t wait to go back!!) and I hope you enjoy the pictures. I’m not sure if this will be my last update before I get home or not. I might have time for my Morocco update while I’m in Madrid, before I come home but I might not. Don’t worry, you’ll get all the info and what happened—and if you don’t hear from me right away it doesn’t mean I’m dead.

PS: The coolest people in the world are: Rachel Brewer (she sent me a postcard), Kristin Hogue, Christie Veronesi & Peyton Fouts (they sent me a really cute homemade card).