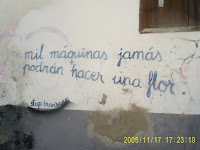 November 19, 2006
¿Que pasa amigos? I´m back from Granada and I opted to write an update before working on my history paper...what a hard decision that was. I´ll go ahead and tell all of yáll Happy Thanksgiving since it´s coming up at the end of the week! Hopefully I can find a KFC in Jolly Old England so I can have some mashed potatoes or something. And thanks to those of you who answered my movie title queries...I now know that I saw The Departed. The graffiti to the left says, "1,000 machines could never make one flower."

PS--I swear to all that is holy that every time I come to this internet cafe I have to sit in the closest proximity to the smelliest Euro-Trash in the entire place. I´ll definitely miss that when I come home. Oh wait, that was a lie!

This weekend was the last trip with the school, an overnight trip to Granada. Granada is about 3 hours away from Sevilla and was the last Islamic stronghold in Spain until Ferdinand and Isabel took it over. It was not conquered by the Inquisition until 200 years after Sevilla, that’s pretty impressive. The Catholic Monarchs (Ferdinand and Isabel) are buried there as was their request because to them, the conquest of Granada in the name of Catholicism was the best thing they ever did. (This inscription says, "There is no pain like being blind in Granada") 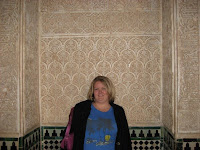 All semester everyone has been saying how beautiful Granada is. My housemother told me that everyone loves Granada. It is also the town in which President Clinton (my favorite; as my housemother calls him “Cleen-tone”) upon seeing the view said that it was the most beautiful spot in the world. I think Slick Willy may have been right. No matter how beautiful people said it was, nothing prepared me for actually being there and seeing it. When I put my pictures on the computer, I didn’t have to adjust any of the landscape ones—there’s no possible way to improve them! I can see why they say that one of the places you must visit if you’re ever in Spain is Granada.

One of the reasons that the Islamic carvings, etc. are 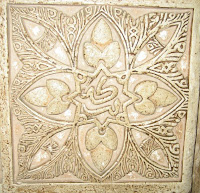 so well preserved is that they are made of plaster. OK, that doesn’t really make sense…if the carvings had been done in ivory or marble or something, they would’ve been stolen. Nobody steals plaster. The carving on the left says something to the effect of, "There is no way but Allah."

We also saw a ceiling that appears to be carved out of wood but it’s actually made of about 8,000 tiny pieces of wood all placed together in a very fancy design! It goes to show how the Muslims were geniuses and really advanced for the time because they used mathematics (a little shout out to Nikki, my favorite mathematician) to figure out how to get the design just right. Had their calculations been even the slightest bit off, the whole thing 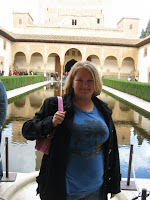 Another thing that the Muslims were famous for was their ability to make irrigation systems that were not only functional but aesthetically pleasing as well. There are many examples of this in Sevilla, beautiful fountains, etc. The Alhambra is full of these same fountains, too. It makes sense since the Muslims were people of the desert and they had to learn how to make the best use of what little water they had, but the fact that they took it to the next level and made everything so beautiful is r

Our tour guide told us that one of the most evident and oldest elements in the Alhambra is actually the Jewish influence. I thought that was really interesting. Once he told us that I really did notice a lot of Jewish influence everywhere. There is this one statue/fountain of lions and it is Jewish. There are 12 lions representing the 12 tribes of Israel. There was some other stuff too but I don’t remember right now off the top of my head.

For all my English majors, it may interest you to know (or it may not) that Washington Irving (the Sleepy Hollow guy) spent a lot of time in Granada. He actually wrote Tales of the Alhambra there. There is a door in the Alhambra that is closed and no one ever goes in it, but it’s a little apartment where he lived for about 4 years, writing. 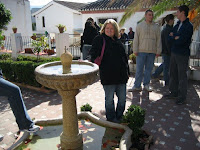 Now the room is used mostly as a storage area which is a little less cool, but a lot more practical from the Alhambra’s point of view…although I have no idea what they’d need to store? The Christmas decorations, I don’t know. 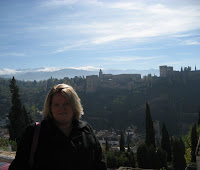